Herschel’s senate run is his first debut into the realm of politics. Besides voting Republican in 2020, his lack of any substantial record gives no insight into his views or priorities. What we do know, based on prior statements, is that Hershel is not a constitutional conservative; he believes the bedrock foundation of our nation is obsolete and subject to loose interpretation. He claims to hold conservative principles, but has nothing to back it up, and his past is broiled with allegations of abuse and domestic violence, bringing his moral character into serious question. 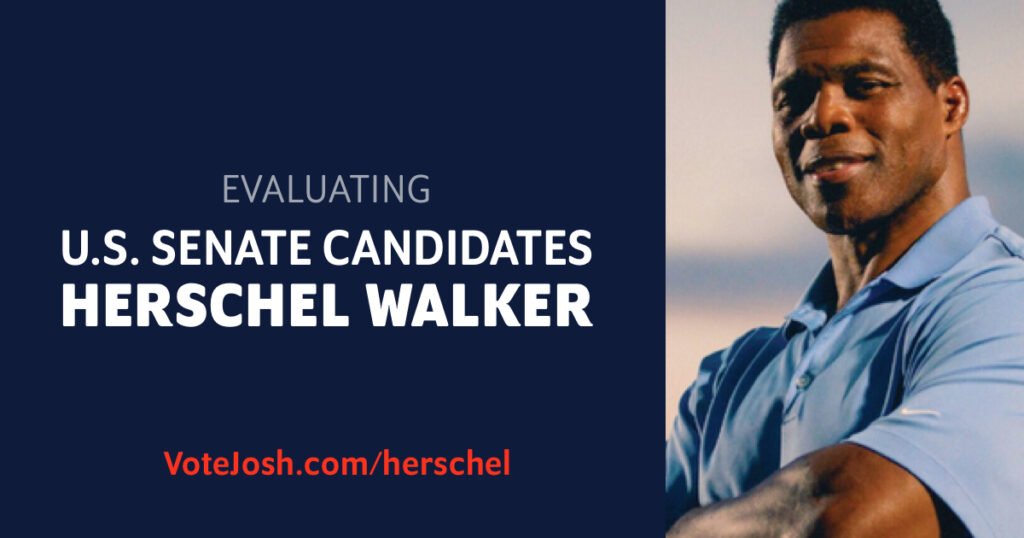 Is he a good candidate?

Almost everyone knows Herschel’s name because of his successful football career, but fame shouldn’t be the only factor for public service. The person we pick must win a general election against Raphael Warnock. Herschel Walker has refused to participate in conversations with other candidates, and so far ignored a one million dollar offer to multiple charities in exchange for a debate with Josh Clark. We cannot afford to place our faith in a candidate who does not even have enough faith in himself to face friendly onstage competition with members of his own party. In the outright hostile environment of a general election, and with the mainstream media propaganda machine working overtime for Warnock, Herschel’s prospects are unacceptably low. His checkered past, in contrast with Warnock’s media promoted self-image as a gentile and altruistic southern pastor, would needlessly give the Democrats a substantial chance at maintaining their power, and sink the next generation farther into an abyss of inflation, instability, and crushing debt. Of all the candidates running for the Republican party nomination, Herschel Walker is arguably the least likely to succeed in turning this senate seat red, a risk we cannot afford to take.

Will he represent Georgia well?

One of the most important traits needed in a prospective legislator is the strong character and rhetorical skill to effectively gather support for laws that benefit Georgians, and passionately fight against those that do the opposite. He must be able to influence the vote of independents, on the fence Republicans, and even Democrats in the halls of congress, not merely sit back and cast his vote along party lines. How can Herschel do this if he is unwilling to stand up and accept even the least aggressive forms of campaign scrutiny? How can he effectively advocate for Georgians if he refuses to speak on important issues? How can we trust him to uphold conservative principles when he lacks respect for this nation’s very foundation, and has no record to insure he will vote against the radical Biden agenda? Even if he overcomes the many hurdles of a general election, placing Herschel Walker in congress will not provide a strong advocate for the issues that Georgians hold dear.
US Senate Candidates Voter Guide

What other information would you like to see/receive about US Senate Candidate Herschel Walker to help you make a decision before voting on May 24th, 2022?